17 On the first day of the Festival of Unleavened Bread, the disciples came to Jesus and asked, “Where do you want us to make preparations for you to eat the Passover?” 18 He replied, “Go into the city to a certain man and tell him, ‘The Teacher says: My appointed time is near. I am going to celebrate the Passover with my disciples at your house.’ ”19 So the disciples did as Jesus had directed them and prepared the Passover. 20 When evening came, Jesus was reclining at the table with the Twelve. 21 And while they were eating, he said, “Truly I tell you, one of you will betray me.” 22 They were very sad and began to say to him one after the other, “Surely you don’t mean me, Lord?” 23 Jesus replied, “The one who has dipped his hand into the bowl with me will betray me. 24 The Son of Man will go just as it is written about him. But woe to that man who betrays the Son of Man! It would be better for him if he had not been born.” 25 Then Judas, the one who would betray him, said, “Surely you don’t mean me, Rabbi?” Jesus answered, “You have said so.” 26 While they were eating, Jesus took bread, and when he had given thanks, he broke it and gave it to his disciples, saying, “Take and eat; this is my body.” 27 Then he took a cup, and when he had given thanks, he gave it to them, saying, “Drink from it, all of you. 28 This is my blood of the covenant, which is poured out for many for the forgiveness of sins. 29 I tell you, I will not drink from this fruit of the vine from now on until that day when I drink it new with you in my Father’s kingdom.” 30 When they had sung a hymn, they went out to the Mount of Olives. 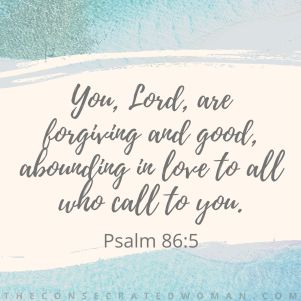 You, Lord, are forgiving and good, abounding in love to all who call to you.

God hates sin but He loves the sinners. If not for His love, mercy and forgiveness where would we be? He is good to all and offers forgiveness to anyone who calls on His holy name. He loves us so much He sent His only Son to die on the cross to pay for our sins so we could receive His forgiveness and mercy. He is ready to forgive and He won’t withhold His mercy. No sin is too great that He can’t forgive it. Come to Him with a sincere heart and ask to be forgiven through faith. Accept the Lord’s forgiveness and know that God will wipe the slate clean and give you a new start.

He does not treat us as our sins deserve or repay us according to our iniquities.

Mercy is when God gives us love, compassion and forgiveness instead of giving us the punishment we deserve for our sins. God’s mercy for His people is demonstrated throughout the Bible but God’s mercy is entirely displayed through Jesus who paid the price for our sins so that we might be reconciled to God. We deserved the punishment of death for our sins but God, who loves us more than we could ever imagine, sent His only Son to save us. God’s mercy doesn’t end at the cross, it’s available to us whenever we are in need. Come confidently to the throne, make your requests known to the Lord and receive mercy for today.

If your enemy is hungry, give him food to eat; if he is thirsty, give him water to drink.  In doing this, you will heap burning coals on his head, and the Lord will reward you.

Have you ever heard the expression “kill them with kindness”?  It means to put an end to anger and bitterness by showing kindness and generosity. As metals are melted by heaping coals upon them, so is the heart softened by kindness. (Jamieson-Fausset-Brown Bible Commentary) The more you treat your enemy with unexpected kindness and generosity the more they will see the same love, forgiveness, mercy and grace that the Lord shows you.  Show kindness even to people who don’t deserve it, not as a reflection of their character but as a reflection of yours.

Those who cleanse themselves from the latter will be instruments for special purposes, made holy, useful to the Master and prepared to do any good work.

No matter what you’ve done in the past, no matter how broken you were God can still use you for His special purposes. When you come to God and turn away from sin you are forgiven and made clean. Your sins have been expunged by the blood of Jesus Christ. You are a new creation and God loves you and He has a purpose for your life. Get right with God, turn away from sin and prepare yourself to do God’s work for only He can turn your mess into a message. Thank God for forgiving you and let go of your past so you can focus on the present and on the future that God has planned for you.

Blessed be the Lord, who daily loadeth us with benefits, even the God of our salvation. Selah.

Wake up with praise on our lips, focused on God. Start your day right with prayer and receive the spiritual blessings the Lord has in store for you today. Each new day is loaded with blessings of love, joy, peace, mercy, grace, redemption, forgiveness and salvation! Praise the Lord for each day He takes care of our needs and bears our burdens. Glorify your Lord and Savior! 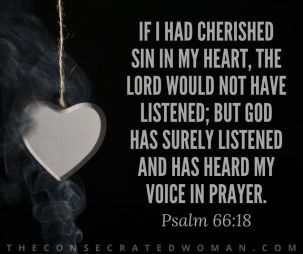 If I had cherished sin in my heart, the Lord would not have listened; but God has surely listened and has heard my voice in prayer.

We all fall short of the glory of God. We are not perfect but what we do when we fail God makes all the difference. Put aside your pride, acknowledge your sin and turn from it. Don’t let sin come between you and God. Don’t let sin destroy your fellowship with Him. Humble yourself before the Lord and confess your sins, ask for forgiveness and He will hear your prayers.

The Consecrated Woman
Blog at WordPress.com.